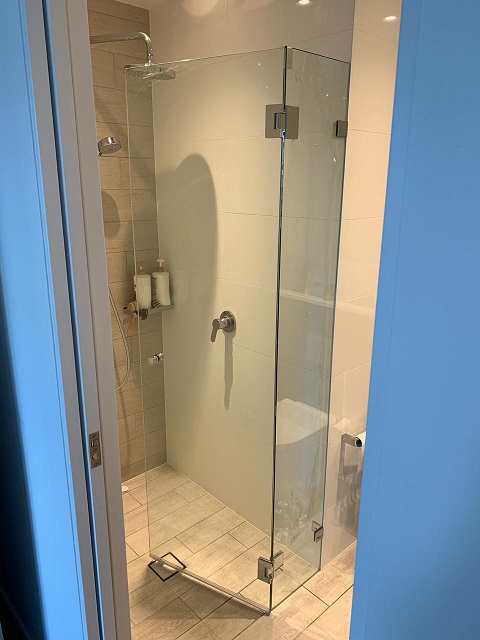 A shower glass in a cream-colored bathroom

As much as homeowners dread encountering a worn-out piece of furniture or a broken household appliance, they have to deal with such troubles that much more. Nobody likes to think about repairing or replacing an item in their home, especially when it’s new, but you can’t stop material things from depreciation.

Likewise, when you install a premium shower glass enclosure in your bathroom, you don’t give much thought to the possibility of a need to replace surfacing down the road. But before you know it, you are standing in front of your now-drab and tattered, covered with what looks like mold, shower screen wondering when did all that happen? Well, as we said, you can’t stop the natural wearing out of things, so instead of getting bummed about a scruffy shower screen, prepare to get a new one.

Many people assume that shower glasses would be life-long investments and they wouldn’t have to change theirs, but that’s not true. Shower screen replacements are more common than you think. However, despite being such a common occurrence, shower glass replacements are often not carried out the right way.

If you want to do this right, here’s what you should know about shower screen replacements.

A Shower Screen Replacement Might Cost More than the First Installation

When getting a shower glass replaced, many homeowners think that a shower screen replacement will cost the same as the first installation, if not less. However, that might not always be the case.

The cost of a new shower glass depends on a number of things, so you cannot just suppose that you will not have to pay more than the first time installation. For starters, which glass will you be using this time? Will you be getting the same shape of the panes as the last time? All these factors play a part in determining how much you’ll have to pay for a shower screen replacement.

Besides, a replacement project happens in two phases; first, you get the present panes removed, and in the second phase, you get the new ones installed. This means it's more work than just a single installation, so naturally, you’ll have to pay more!- provided that you do not opt for cheaper glass quality and hire uncertified tradespeople.

When you decide to get your shower screen replaced, you need to decide if you want to go with a new design or stick with the old one. Choosing a new style may seem like a lot of work and inconvenience, which it most likely will be, but if you want to revamp your bathroom, you should try something different. For instance, if you currently have a framed shower glass, you might want to consider getting a frameless replacement. You could also try a new shape or print. Let’s say the glass panels you have now are plain and bland. But you can change that by picking out a colored ceramic printed glass sheet.

Whether you choose to keep your shower glass enclosure that way or not is up to you; let us tell you that an imaginative, unconventional shower sheet adds so much personality to a bathroom.

When a homeowner gets their first shower glass installed, they must take into account the glass type for safety reasons. It’s a fact that a glass sheet is prone to breakage or explosion.

You might not even realize, but the wind pressure could be damaging your shower cabin little by little until it shatters into shards. While the possibility of such an accident is not too high, it’s still something to consider. Keeping the fragility of glass panes, most shower glass experts tell customers to invest in enclosures made with toughened, otherwise known as tempered glass sheets.

However, at the time of shower screen replacements, the importance of glass quality can slip one’s mind. To keep yourself and your family safe, you should specifically ask for tempered shower screens.

A Shower Screen Replacement Is Not A DIY Job

Thanks to the tutorial galore on the internet, many homeowners believe they can do most if not all, household repair/construction jobs themselves. And replacing shower sheets lies high up on that list.

But somethings turn out better if left in the hands of experts. You might think that you can put in a new shower glass yourself because YouTube told you, so, in reality, things are going to turn out quite differently. And all the money you thought you’d save by going DIY will leave your pocket eventually, possibly more than that.

If you don’t want to lose more money on a shower screen replacement than necessary, don’t try doing the job yourself. Or else be ready to spend wads of cash on fixing what you will inevitably mess up.

A Shower Screen Replacement May Not Always Be Necessary

Many times hasty house owners choose to replace their shower sheets when they didn’t need to do that. As strange as it may seem, many people tend to look over the possibility of repairs being enough and get their shower glasses replaced. While there is nothing unlawful about that per se, it just costs more money than necessary.

If you think your shower cabin looks shabby and should be replaced, perhaps you should first try a few home remedies to brighten up the panes. For example, if your shower sheets have marks and scratches, consider removing them using toothpaste and a lint-free cloth. Apply the paste and rub it around well with the rag for a good fifteen to twenty minutes. Once the toothpaste has considerably dissolved, use another lint-free cloth, soak it in warm water and wipe off the residue.

A shower screen may not always need to be changed; sometimes, just a little extra tender love and care can do the job! So, before you jump the gun and decide to replace your perfectly fine shower sheets, ask a professional to assess the ‘seemingly unsalvageable’ cabin!

All shower sheets require some amount of maintenance. If you fail to provide that, you’ll have to replace yours sooner than you want, so take good care of your shower glass.